The Value of Spinning 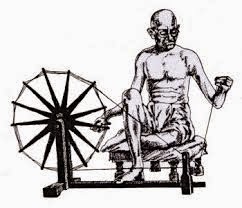 One thing I value about Gandhi's leadership in the struggle for India's independence was his Constructive Program of spinning.  Not only did it create the economic and spiritual independence sought by the Indian people, it gave everyone something productive to do when no one knew what to do.

When Gandhi was uncertain of what to do next in the movement, he would spin cotton.  It was an effort that allowed him and others time to think and strategize while continuing to work for independence.  Sometimes he would think for weeks or months on end.  Nonviolence has no timeline.
Nonviolence is often seen ONLY as civil disobedience.  While Satyagraha is visible and confrontational, Constructive Program builds the just and peaceful world that does not yet exist.

So, find your Constructive Program.  Take time to spin.  There is no hurry.  You are building the solutions you seek.
Posted by Dave Soleil at 12:01 PM